Research for short doc: 1989, the year that changed Europe 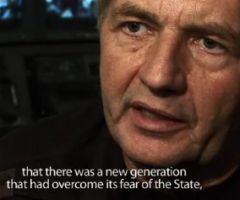 Research for short doc: 1989, the year that changed Europe

1989 was the year that changed Europe. 20 years later, filmmaker Patrick Becker revisits Central and Eastern Europe, to interview those at the forefront of change, from students to border guards. I contributed the eyewitness research for the Berlin episode.

Becker’s eleven short documentaries take you through Eastern Europe and the lives and stories of those involved: How do people active in the tearing down of the iron curtain remember this historic year in retrospective? How has it changed and shaped their lives? The documentaries, funded by the European Commission and produced on behalf of Tipik communication agency, are subtitled in all 22 European languages. You can watch them here.

On the picture you see an image of the film with journalist Roland Jahn of „Kontraste“ television news program, who organized press coverage on East Germany before and during the peaceful revolution.

He was forcibly expelled in chains from the GDR in the early 80s. From West Berlin, he continued to support the opposition as a journalist.

Though illegal, it was possible to watch West German television in East Germany. The footage compiled by Roland Jahn and his team showed an uncensored image of the GDR. State authorities considered Jahn such a major threat that they carried out one of the biggest secret service campaigns ever in GDR history.

But Jahn continued to report and, in 1989, broadcast spectacular pictures that brought the possibility of change into people’s minds. It was his cameramen who shot the only pictures of what is considered to be the most important demonstration before the Fall of the Wall, in October 89 in Leipzig, from the top of a churchtower.

You can also see painter Katrin Hattenhauer, one of the initiators of the Leipzig demonstrations, in the „Germany“ documentary.