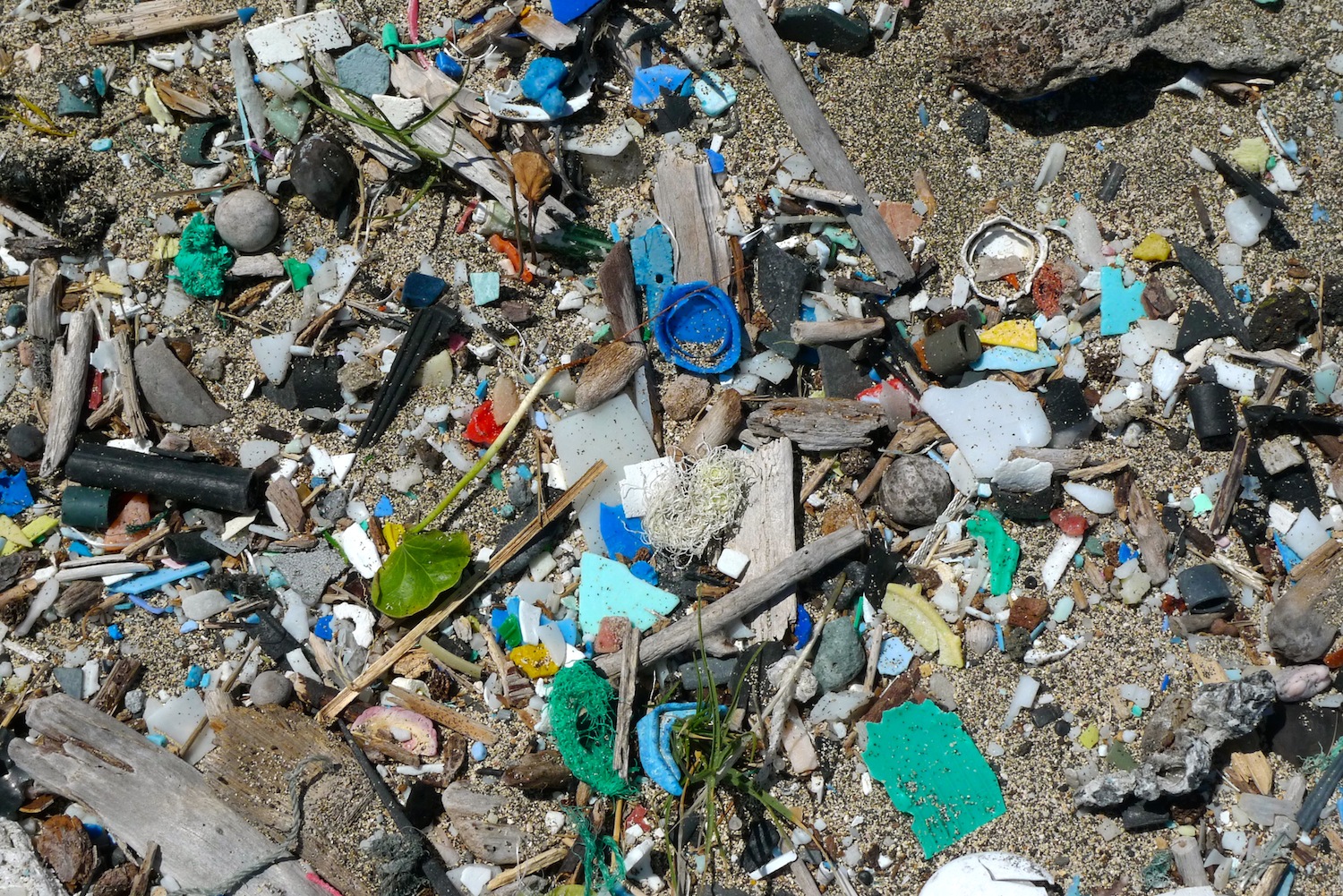 “Recycled Island creates a self-sustaining habitat floating in the ocean. The urban area houses around five thousand people. Agriculture supports a self-sustaining environment, together with seaweed cultivation.… Natural resources are used to provide food, energy, transport, and comfort.… The entire island is constructed from plastic trash that floats in the ocean. These plastics go through a recycling process that constructs hollow blocks which optimize the floating capacity of the island. The creation of valuable land from plastic waste stimulates the cleaning of the ocean.…The prototype will start a new way of sustainable living.”

Narrator
The fact that plastic poses a global problem is not new. Yet more and more litter is entering the oceans. What can be done? The concept of an island made of plastic was introduced by Dutch architect Ramon Knoester. The video quickly gained in popularity on the Internet.

“I think that if people come up with the idea of turning the trash into islands, it’s because they believe there are islands of trash. I don’t understand what the Dutch need an island of trash for. To turn it into something else, but leave all that junk out there, with all its problems, like chemicals and ingredients leaking from it – that’s no solution.”

Narrator
Another proposal comes from Boyan Slat, an engineering student from Delft [in the Netherlands]. At a [TEDx] event, he presented a platform to filter marine litter from the water. Within five years, Slat claims, he will be able to clean the gigantic oceanic gyre in the North Pacific.

“The oceanic current, moving around, is not an obstacle – it’s a solution.”

Narrator
And for young designer Elie Ahovi, the solution is a mobile net for catching plastic that swarms the seas like a drone.

“Try to imagine how that should ever work. There are millions of tons out there, and thousands or millions of tons are added to this each year. What kind of devices could collect all of that? I think this is literally a Sisyphean task.”

Narrator
It would be a huge challenge. NOAA, the environmental agency of the United States, presents the task this way: If you had one year and 68 boats, you’d still only get to [clean] 1 percent of the North Pacific. Sailor and activist Charles Moore, discoverer of the [Great Pacific] garbage patch, calculates that in order to clean all five oceanic gyres, a thousand boats would have to filter the water around the clock – for 79 years. This possibility, of course, is purely hypothetical. Neither does the technology exist yet, nor would it make much sense. Enormous amounts of energy would be required, in order to only scratch the surface.

“Some people say marine litter is sexy. The topic is in fashion and sells well.”

Narrator
For Kim Detloff of the [German environmental NGO] NABU, the many cleaning concepts indicate how much public interest in the topic of marine debris has grown.

“I look at it from the bright side. It has been a niche topic for way too long. After all, the MARPOL convention was established in the 1970s. We’ve known for over forty years that litter damages the oceans, but still haven’t got a grip on it.”

Narrator
MARPOL, short for marine pollution, is the International Convention for the Prevention of Pollution from Ships. In 1988, Annex V was added, prohibiting the dumping of plastics into the oceans. The agreement is widely regarded as a failure.

“At the moment, you could get the impression that there is almost a competition; it’s sort of an activism. For example, the plastics industry promotes initiatives to filter trash with a mesh from the water. But they don’t consider that this means filtering marine life such as small fish or planktonic organisms as well. A so-called solution like that could do more harm to ecology than benefit the oceans.”