Nikolai Maximenko and Gisela Speidel on Plastic in the Oceans 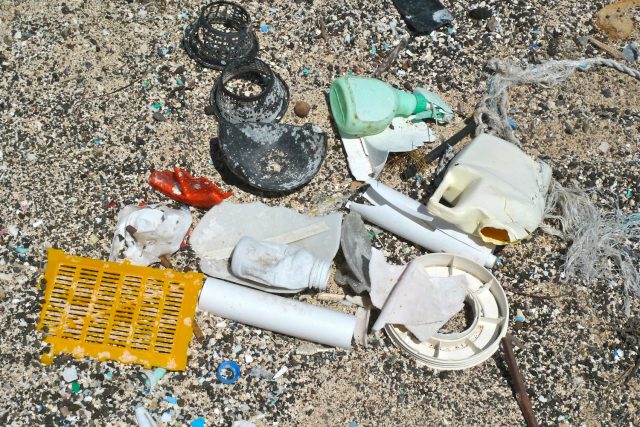 Nikolai Maximenko and Gisela Speidel on Plastic in the Oceans

In early 2011, I had the chance to meet with Nikolai Maximenko and Jan Hafner, oceanographers at the International Pacific Research Center in Hawai’i, and talk to them about the problem of marine debris and plastic trash in the oceans. Gisela Speidel, the press person at IPRC, also had some interesting experiences to add. Here are their quotes, and info on the research on marine and tsunami debris they do.

„Here on Hawaiian beaches, we have debris from all around the North Pacific. We have pieces that we know are coming from Asia, we have plastic that we know for sure is coming from West Coast of America, of North America, and of course we have local products, too.“

Model of Marine Debris Accumulation
In his Plastic Pollution Growth Model (2008) Maximenko and his team simulate how an initially equal distribution of floating objects will behave and move through the oceans over time, in this case a period of ten years. The model predicts that marine debris will accumulate in five major regions. Those regions coincide with the great oceanic gyres that are produced by surface currents. The model is based on data by drifter buoys and assumes that plastic debris will behave in a similar way. It needs to be stressed that this is a simulation, and that empirical data is currently being collected by various researching institutions such as the Sea Education Association, Algalita or 5Gyres. See this article for more information on the model.

„You may be surprised, it’s actually not the ocean that causes those patches, it’s the atmosphere. And it all starts from differential heating. Everybody knows that the equator and poles, they are heated by solar radiation at different rate. Poles are icy, the equator is hot. This causes convection in atmosphere. And this produces convective cells. And convective cells in atmosphere are arranged in such a way that at subtropical latitudes, winds diverge. And this induces convergence in surface ocean currents.“

„If ocean currents were steady, that convergence would keep them at the same location. In fact we have different modes. We have eighties, we have el nino, we have seasonal cycle, all these changes, they modify ocean currents, and at some moments all this garbage collected in the North Pacific Patch, it comes to Hawaii.“

„They [the beaches] are just aweful if people do not pick up the garbage – especially on the windward side. It used to be that there was just lots of garbage in the most beautiful beaches. Now people are starting to pick it up, and so our beaches, they’re a lot cleaner. But it’s very clear that we are the target of these circulations that bring the garbage from the Garbage Patch here.“ Nikolai Maximenko | Mp3 | What we know and don’t know

„We know that garbage patches are there. We do not really know where that plastic comes from, and where does it go to. In the North Atlantic it seems that increased production of plastic did not cause increased density of microplastic in water. So it disappears somehow. And if there is some plastic burried at the ocean floor, it is still to be found.

Nikolai Maximenko | Mp3 | Where does the ‚lost‘ plastic go to?

„It is open question. There were some efforts trying to find plastic on the bottom just underneath patches. But that is the last place where I would be looking for it. Because it’s collected at the sea surface by surface convergence. And convergence is compensated by divergence in deeper ocean. So whatever sinks down, if it sinks slowly, it’s actually pushed away from that area. That area must be…that bottom underneath garbage patches must be the cleanest places on Earth ocean.“

Tracking Tsunami Debris
Shortly after our interview in February 2011, Japan was shook by an earthquake and hit by a gigantic tsunami wave. Hawaii got away with just a few smaller injuries, but Maximenko and his team soon began investigating the effects the tsunami wave would have on the North Pacific region. The tsunami had destroyed towns and cities and had sucked some of the debris back into the ocean. The researchers now expect the debris field, which they estimate might still contain one to two million tons of material, to move eastwards across the Pacific, then towards the Hawaiian archipelago and at some point merge with the „Great Pacific Garbage Patch“. You find more info on their Tsunami Debris page and in their debris news feed. The first of the following two Gif-Animations is a projection, a simulation of the way the tsunami debris might move in the next years. The second is the attempt to track the actual ways of the debris field, and updated daily.

Actual daily tracking of the debris field until today:

„I do not have my solid position. I’m just trying to think more before getting my position. And to me it’s not obvious that plastic is all bad, because other alternatives for our civilization could be even worse. Like using animal skin instead of plastic clothes. So I don’t know it is better. We need to actually compare it in in in very smart, not just emotional way.“

Nikolai Maximenko | Mp3 | Can bioplastic be a solution?

„In case of biodegradable products, it’s not straight forward. We need a more complex approach because I do not know what is better to have some intact plastic, long-living plastic isolated in some safe areas, or to have it scattered or disolved in water and adding to our problem, so that we can not extract it in any way. Of course there is problem that this long-living plastic, it’s eaten by animals, it’s toxic, so this needs to be adressed somehow.“

I wouldn’t call it Hawaiians, it’s more an American perception of plastic. And I think, this is changing. That now everyone I think in the United States but especially in Hawaii, they realize we need to have recycle, reuse our bags. I just heard a program this morning about how we’re using our bags now and have to bring them to the supermarket – now they’ll charge us, I think 9 Cents for a paper bag. So things are changing, awareness is coming.

Some of these quotes were included in the German radio feature „Der Plastikstrand von Hawaii“ („Hawaii’s Plastic Beach).